January 11, 2016
Buffer Overflow Attack:
What is buffer Overflow:
A buffer overflow happens when too much data put into the buffer which exceed the length of buffer defined and memory corruption happens or application crashes.
From Crashing to Exploit:
After crashing a application with a fuzzer,next step to own the Application or exploit the Application.so after overflown the extra data is overwriteen to EIP register.we will discuss more in the upcoming blogs.so if we point the EIP to the shellcode we can exploit the application or vulnerability.
Here we will discuss exploit and gdb on Linux platform.first we will discuss gdb .
so far in the Internet we have seen lots of tutorials regarding Exploit,but in modern L:inux there are lots of protection like DEP,ASLR.so we have to disable that in the OS
ASLR is implemented by the kernel and the ELF loader by randomising the location of memory allocations (stack, heap, shared libraries, etc). This makes memory addresses harder to predict when an attacker is attempting a memory-corruption exploit. ASLR is controlled system-wide by the value of /proc/sys/kernel/randomize_va_space.
so we need to disable that

Each execution of a program results in a different stack memory space layout. This makes it harder to locate in memory where to attack or deliver an executable attack payload. This was available in the mainline kernel since 2.6.15 (Ubuntu 6.06).

Each execution of a program results in a different mmap memory space layout (which causes the dynamically loaded libraries to get loaded into different locations each time). This makes it harder to locate in memory where to jump to for "return to libc" to similar attacks. This was available in the mainline kernel since 2.6.15 (Ubuntu 6.06).

Each execution of a program that has been built with "-fPIE -pie" will get loaded into a different memory location. This makes it harder to locate in memory where to attack or jump to when performing memory-corruption-based attacks. This was available in the mainline kernel since 2.6.25 (and was backported to Ubuntu 8.04 LTS).

Similar to exec ASLR, brk ASLR adjusts the memory locations relative between the exec memory area and the brk memory area (for small mallocs). The randomization of brk offset from exec memory was added in 2.6.26 (Ubuntu 8.10), though some of the effects of brk ASLR can be seen for PIE programs in Ubuntu 8.04 LTS since exec was ASLR, and brk is allocated immediately after the exec region (so it was technically randomized, but not randomized with respect to the text region until 8.10).

Each execution of a program results in a random vdso location. While this has existed in the mainline kernel since 2.6.18 (x86, PPC) and 2.6.22 (x86_64), it hadn't been enabled in Ubuntu 6.10 due to COMPAT_VDSO being enabled, which was removed in Ubuntu 8.04 LTS. This protects against jump-into-syscall attacks. Only x86 (maybe ppc?) is supported by glibc 2.6. glibc 2.7 (Ubuntu 8.04 LTS) supports x86_64 ASLR vdso. People needing ancient pre-libc6 static high vdso mappings can use "vdso=2" on the kernel boot command line to gain COMPAT_VDSO again.
Vulnerable Program:
here we will show a simple c programm which is vulnerable and after that we will try to exploit it.
int main(int argc,char *argv[])
{
char buff[60];
memcpy(buff,argv[1],strlen(argv[1]));
printf("I am Vulnerable,Please exploit me.My length is:\n%s",buff);
}
Compile with disabling stack protector option by below command
gcc vuln.c -o vuln  -fno-stack-protector
Now if we run the program with command line argument

Now nothing happens.because the length of string is less than defined.i.e:60.so if we cross beyond 60,there will be overflow and we can exploit it.
let;s start with fuzzing and check the stack register in gdb .

let's fuzz the application,and check it through debugger.please check below:
r $(python -c 'print "A"*80') 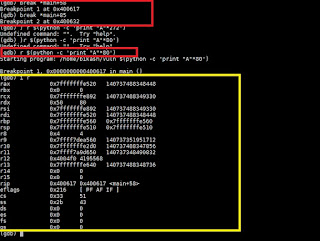 Breakpoint 2, 0x0000000000400632 in main ()
so in the Above programm which is compiled in 64 bit system can take upto 68 bytes of buffer.so we wil give to 76 bytes of  data as below and we can overwrite the eip register in gdb
r $(python -c 'print "A"*76')
Let's continue the program and stepin the program.Eventually we will crash at RIP register.check below diagram : 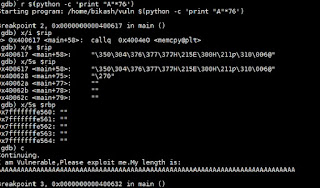 Our breakpoint is hit,which is nothing but calling memcpy function.After that continue the programm while we checked RIP register. Afetr that we come to next breakpoint.
check the image below: 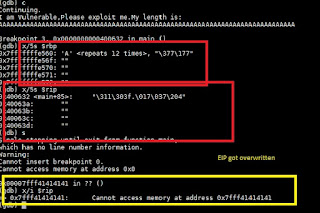 We got shell.Pwned the system

Popular posts from this blog

October 30, 2020
Hello folks, hope you are in good health in this lockdown. during my day to day work i invest time in reverse engineering, coding and some malware analysis. so thought to share these info which can help. A malware analysis and research are very trivial process for an organization to track down threats, malicious actors whose main intention to turn down organization’s reputation and economy. Also, this applies to government organization where they conduct targeted attacks like APT (Advance Persistent Threat). In general attacks can be combination of vulnerabilities, exploit and malwares . Security companies produces antivirus product, IDS, IPS, sandboxes and EDR products to track down those threats to protects organizations. An antivirus product contains both behavioral and signature-based even a combination of sandbox mechanism, which is given by security researcher to block these attack attempt A Malware researcher generally use both static and dynamic analysis of malware sampl
Post a Comment
Read more

September 06, 2020
Generally Exploiting In windows system is very tough,though you have to overcome various protection and bypass.In some cases you have to use Kernel Mode exploits. And also we will show you the target machine which we will perform attack is XP,otherwise if we will try on win7,win8,win10, then we will have to cross the path where all doors are closed.hope you got my point.First we will discuss some of the protection mechanism here. ASLR DEP SEH SAFESEH SEHOP Control Flow Guard(CFG) Stack Compiler Option(/GS cookie option) EMET Heap Isolation and many more coming............. But before starting our exploit development process we should know some theory which is very necessary.Otherwise we are in the middle of way and we don't know the path to go around. Windows Memory Layout   In an X86 system, when a application starts,a process is created and virtual memory assigned.so the address space ranges from 0x00000000 to 0xFFFFFFFF which is called user-land level of OS.If the address range
Post a Comment
Read more

May 19, 2020
Hi Folks, here I will analyze a malware which is possible packed with nspack. Details are below: SHA256: 5df0b1b07143c880c76d6e82253a20192981c83c3ea68bf86ffede6b17c01da4 File name: 5df0b1b07143c880c76d6e82253a20192981c83c3ea68bf86ffede6b17c01da4 First, we will do static analysis of the file. Using string utility: we see following things. most of the strings are obfuscated or encrypted content. we saw the strings like. nsp0 .nsp1. .nsp2.if  we google it we can know that it is a packer which based on NS packer. VirusTotal Analysis: Upon analysis using virus Total we saw detection 49 out of 55 which is a malicious in nature so we should unpack the malware because without unpacking the malware looks obfuscated and it is not possible to debug the instruction.it looks like below in IDA As we saw above we saw custom sections like ns0 ns1 ns2 and OEP starts with PUSHF PUSHA which is indication of a packer.we can confirm it
3 comments
Read more